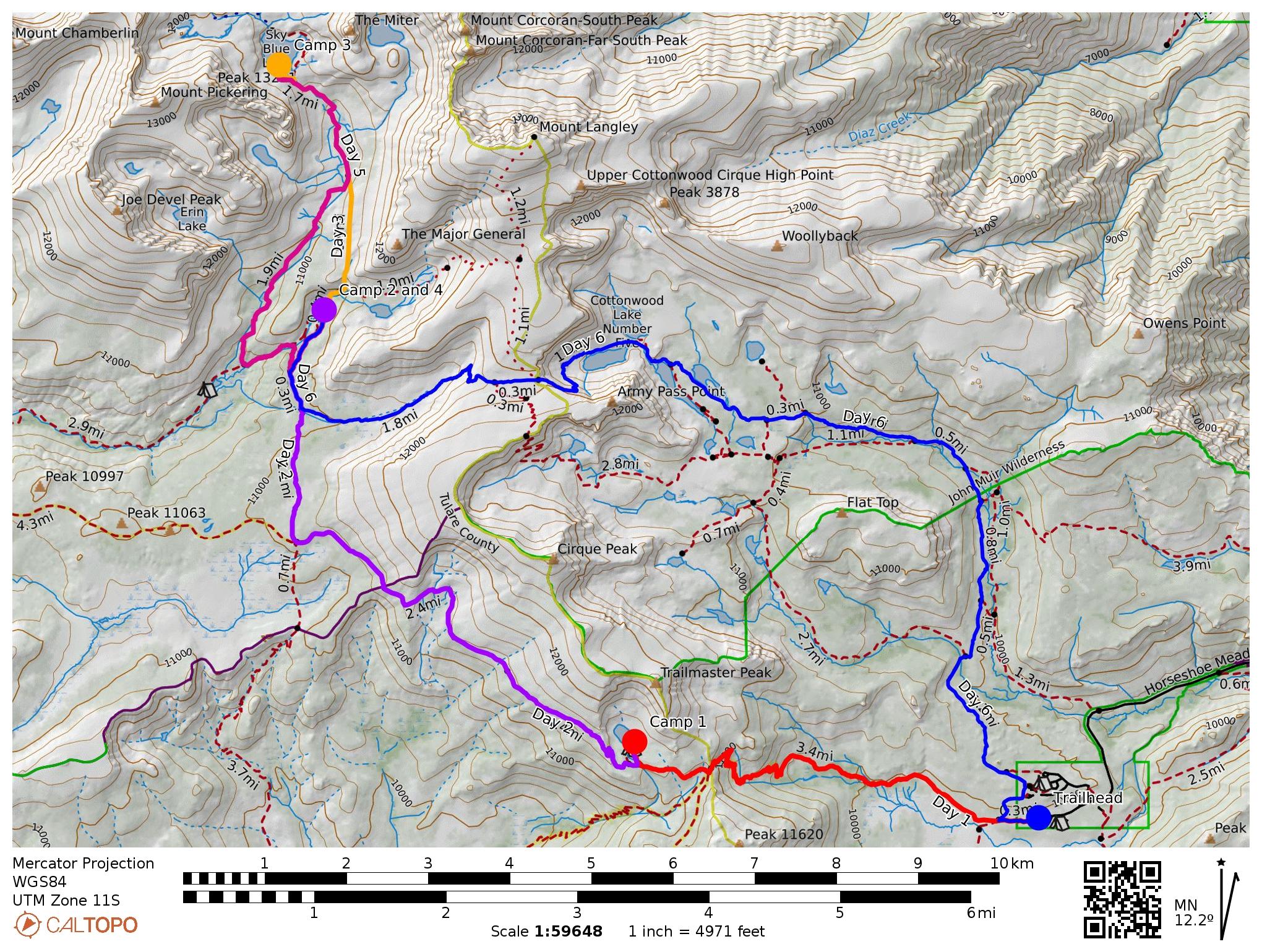 Trailmap of our route starting at Horseshoe Meadows and into the Miter Basin.

Day 1 (red line on the map) was a point-to-point day starting from Horseshoe Meadows trailhead and ending at Chicken Spring Lake. Total distance, just about 4.5 miles with an elevation gain from 10,000 to 11,300 feet. This day was surprisingly difficult despite the short distance and relatively small elevation gain, but it was high to start with, and a pretty steady long climb for the second half of the day in a pretty exposed area. But the first part of the day was lovely and flat! ...through sand. 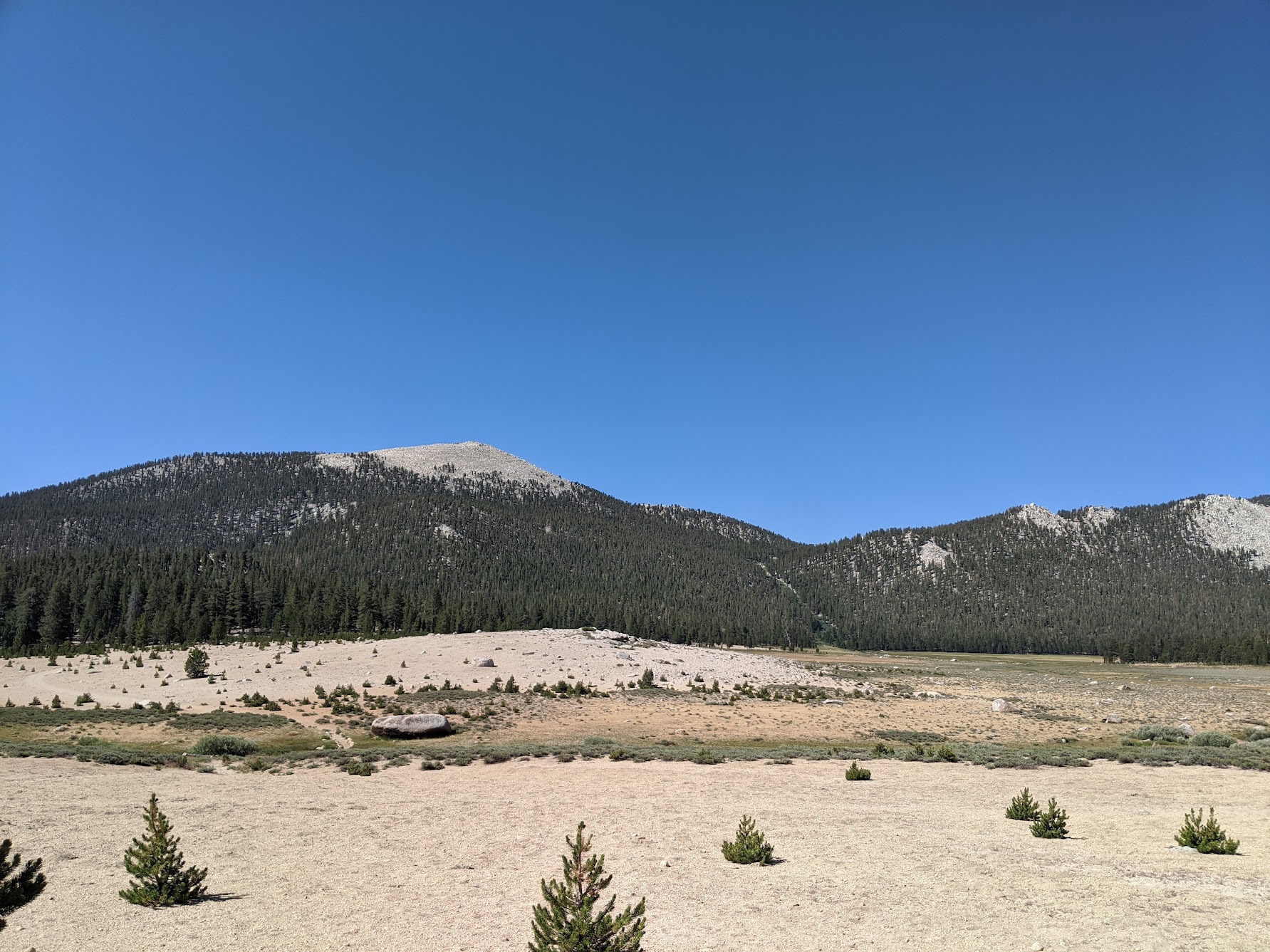 The neat thing about this day is you can see the path you take from the trailhead for a long time. 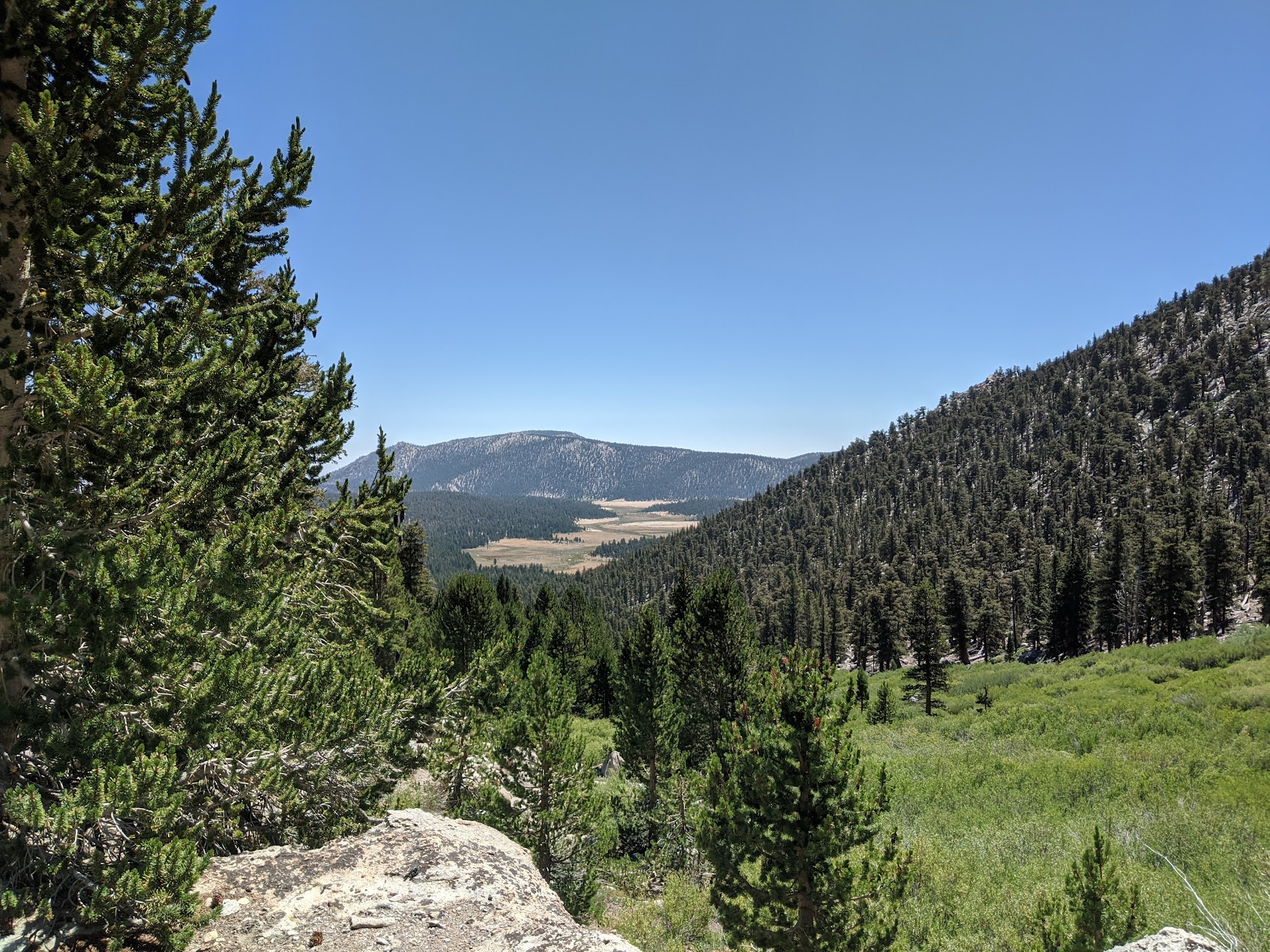 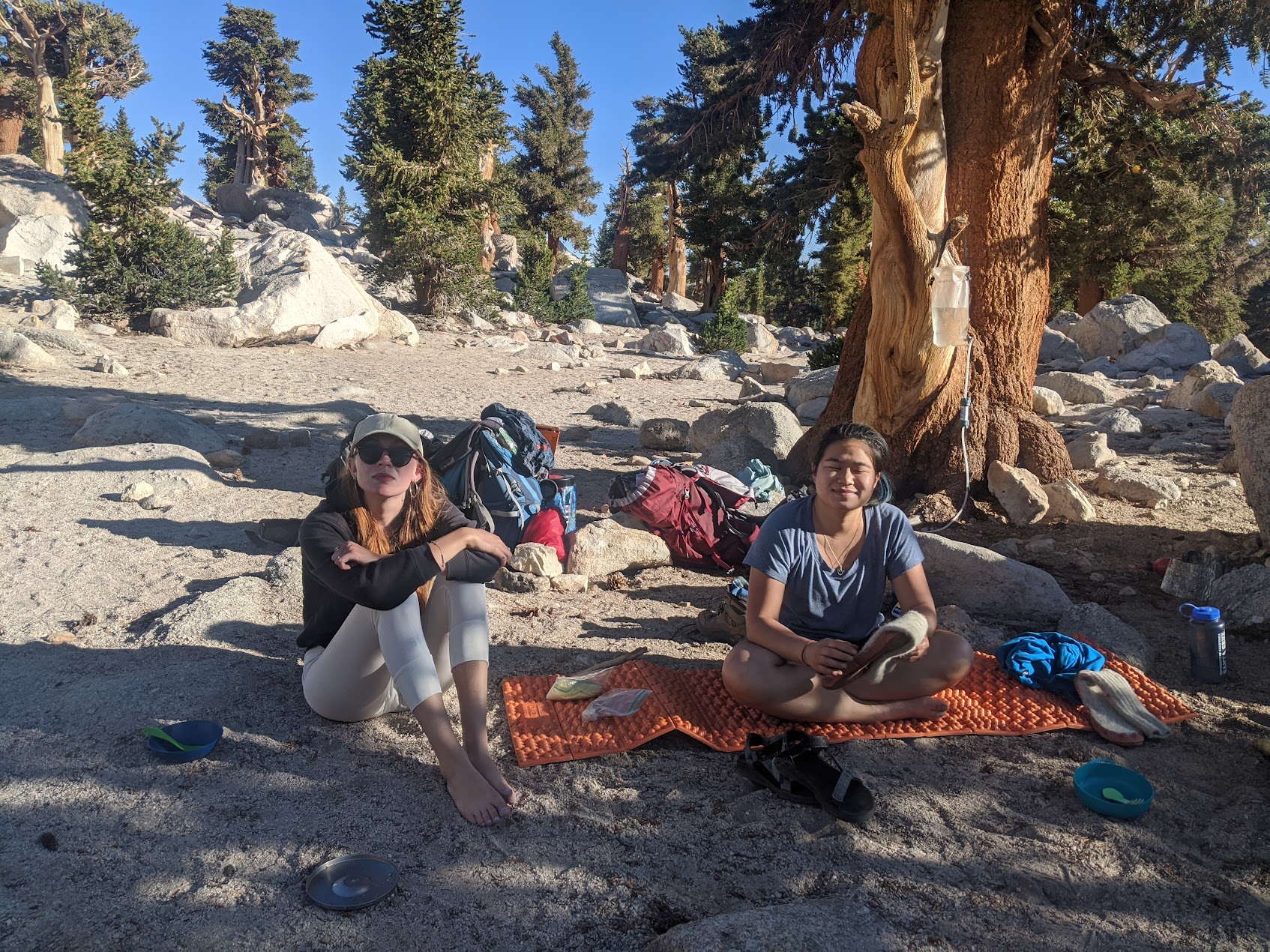 We had a great campsite, good water access. But it was a pretty crowded lake, so I'd recommend getting there early if you can.

Day two started with a quick but tiring climb over a pass just after Chicken Spring Lake, and along the PCT towards the Miter Basin. Overall a pretty easy day, as most of it was downhill over 6 miles. We took a fork off the PCT towards Soldier Lake, where we made our second camp. 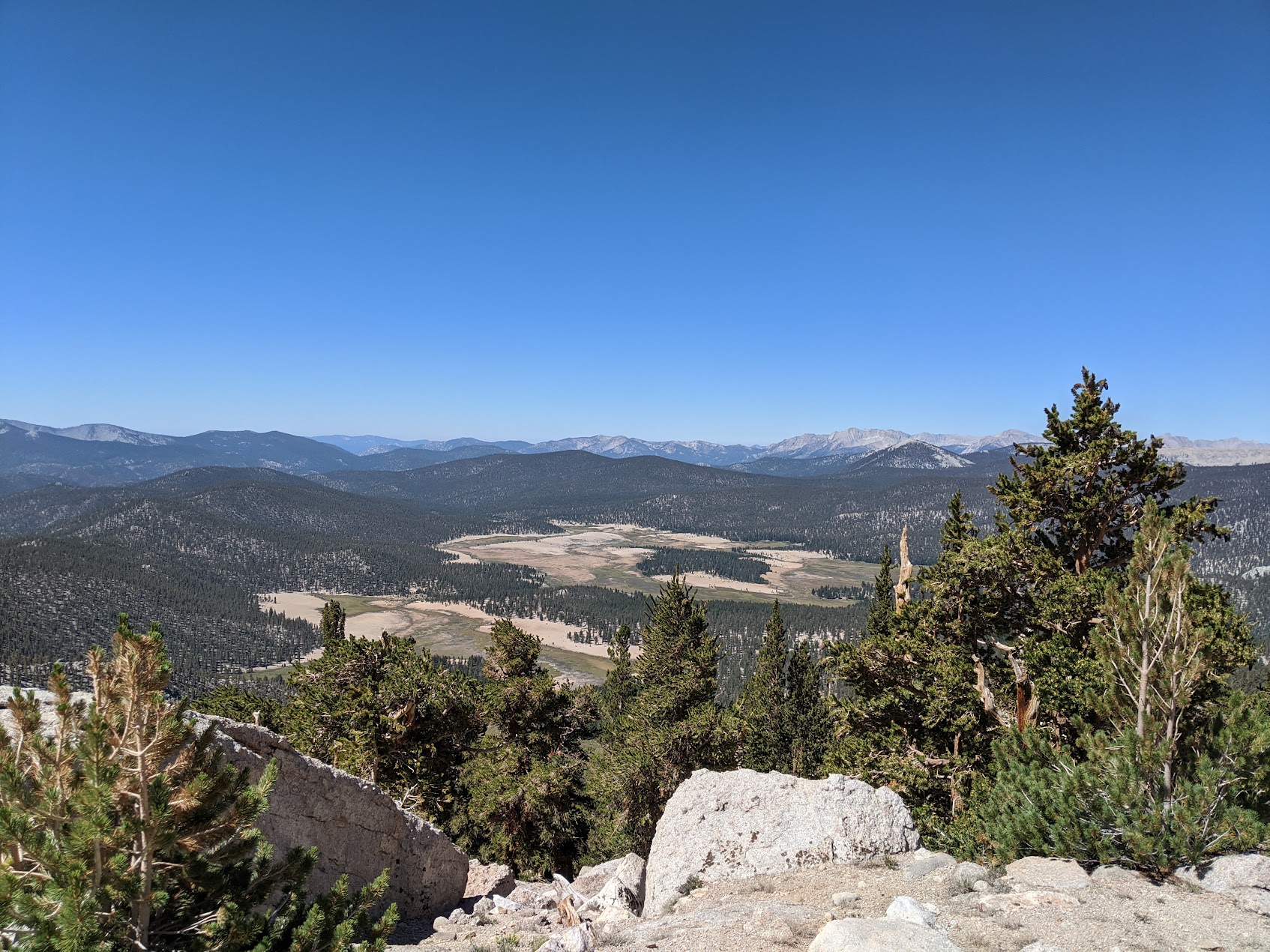 Looking down from the PCT into the Big Whitney Meadow.

Decently high trail, no wonder we were breathing hard. 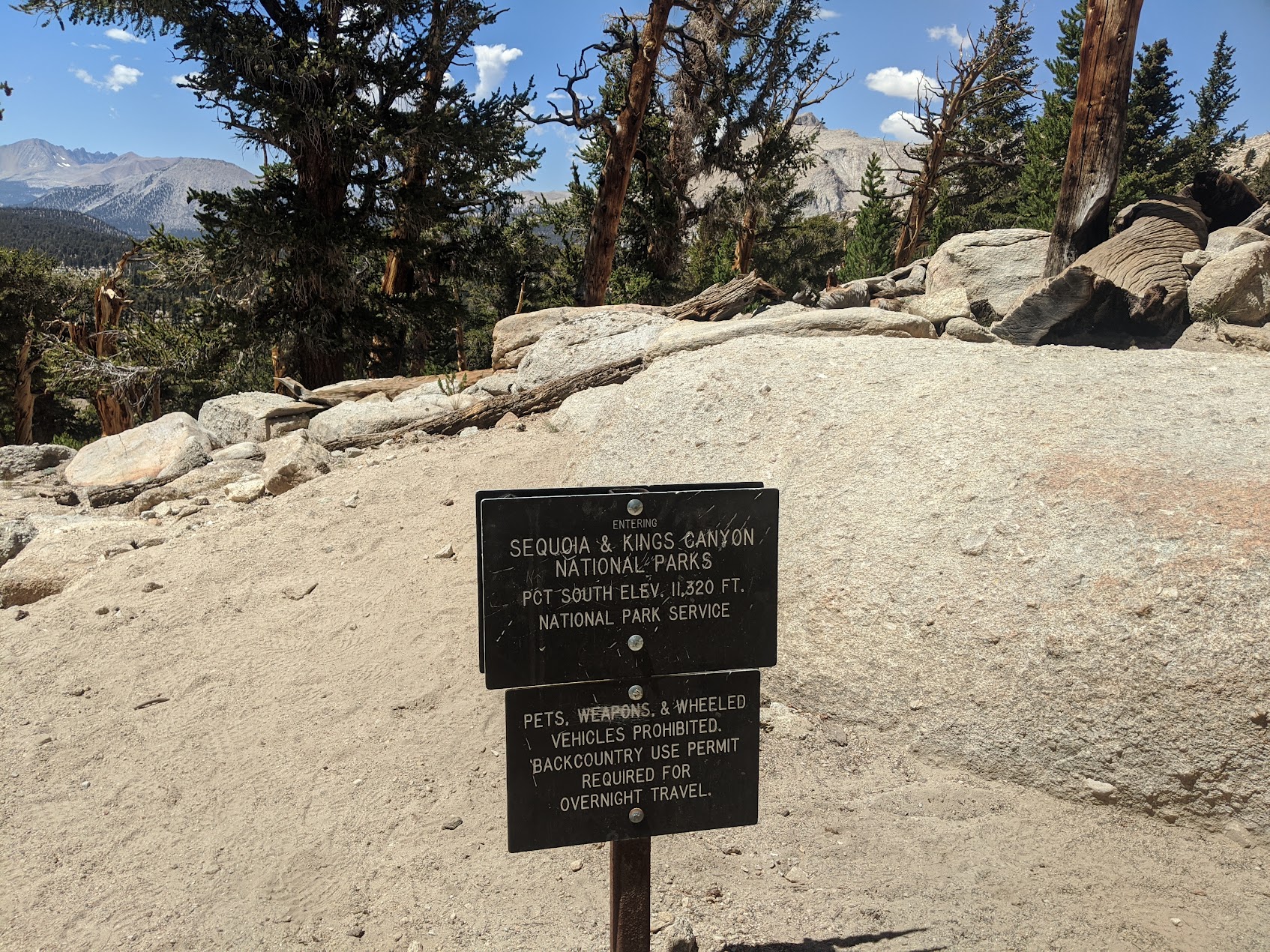 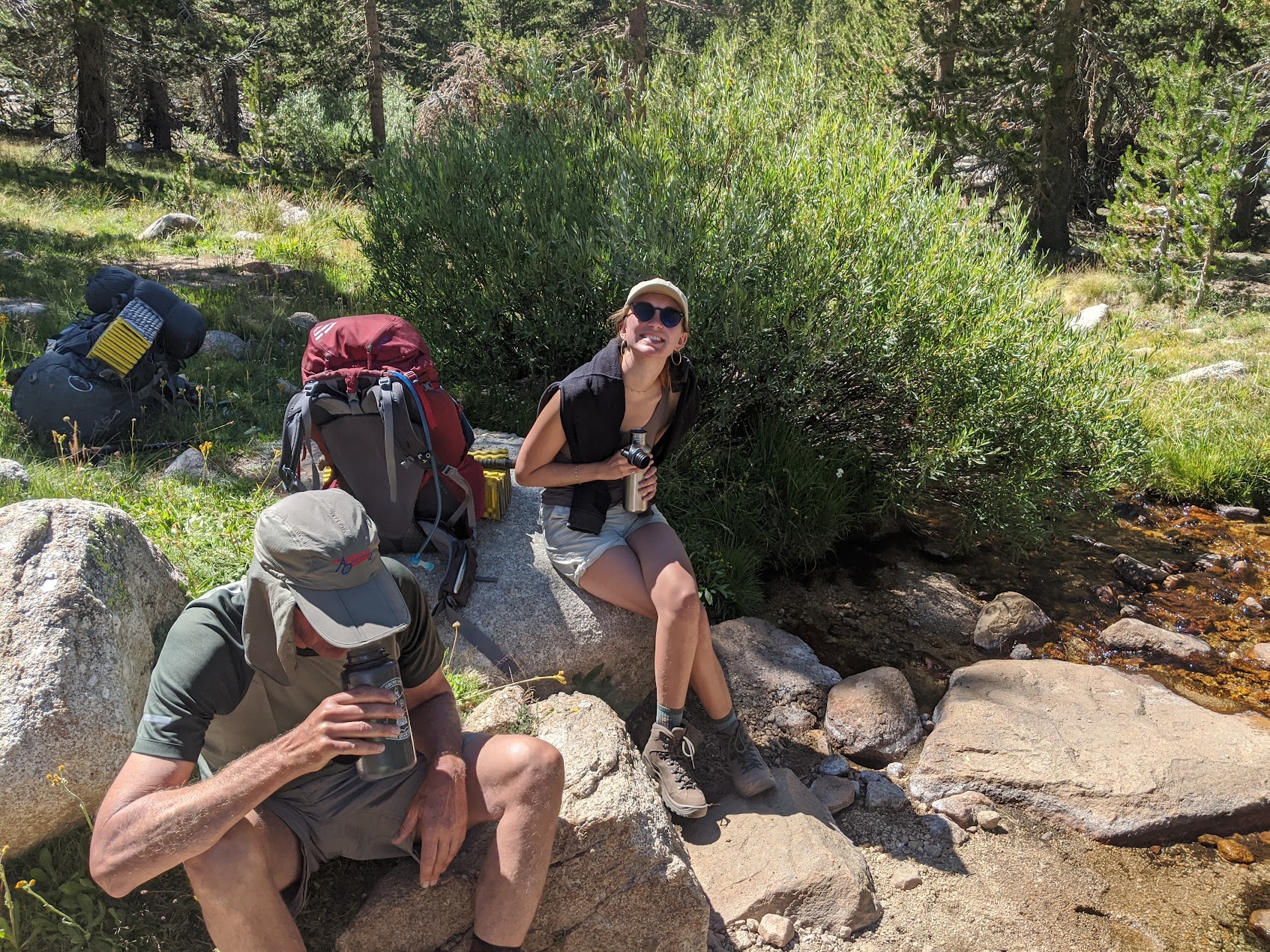 Refilling water at a lovely stream.

Soldier Lake has a little peninsula with decent camping on it, but it too was pretty crowded, so we went around the side and found a little campsite on the far bank.

Oh boy this day started off hard. Getting into the Miter Basin isn't too hard if you start from a little lower down than Soldier Lake, where there's a real trail. But of course, in our infinite wisdom, we decided to not do it that way. There was an "indicated" trail that went up a drainage connecting Soldier Lake to Upper Soldier Lake that we decided to "walk" up. It was when we got about half way up, past the first Bushwacking Challenge, that we realized our grave error. Day 3 is the orange line on the map. 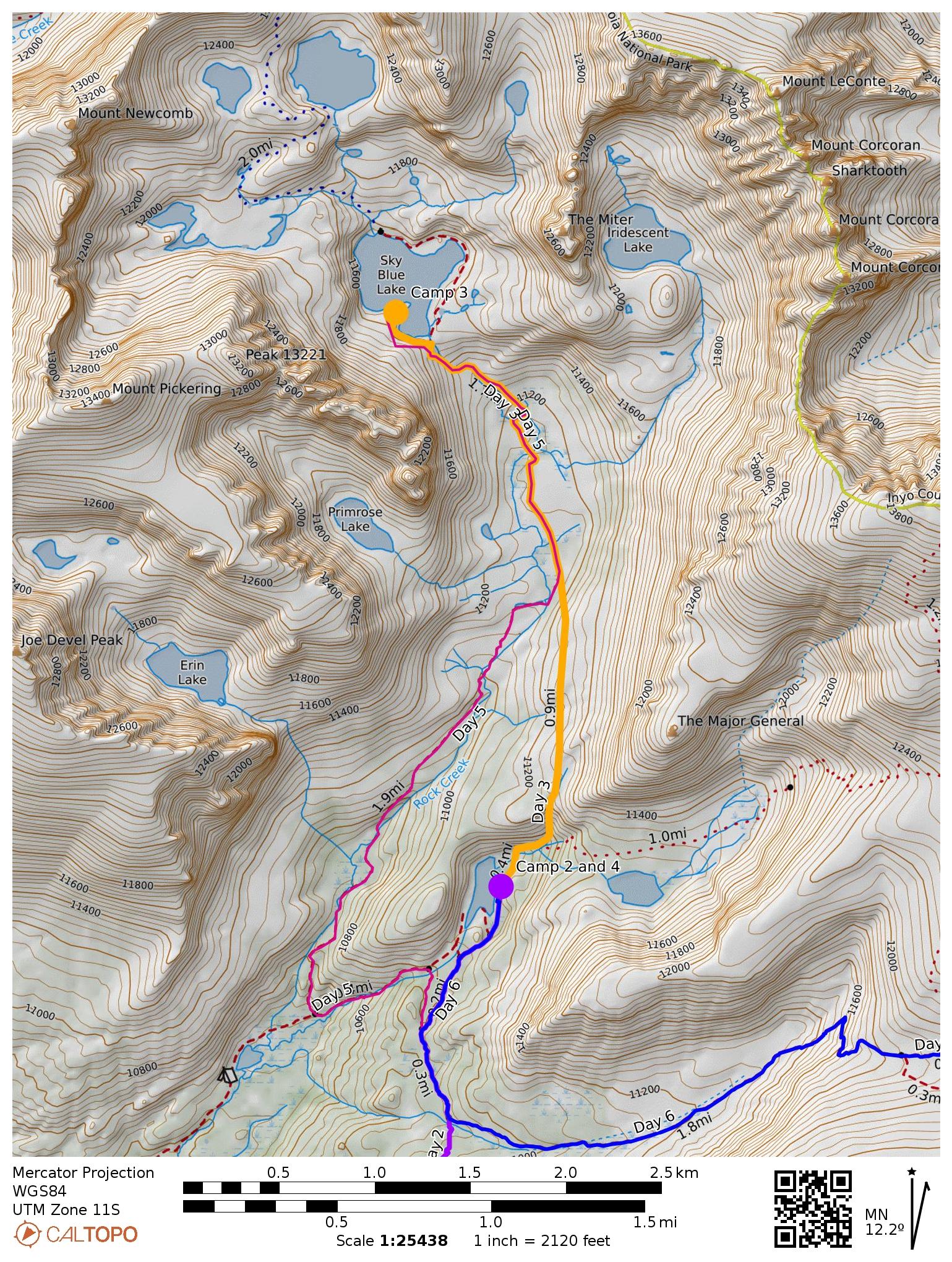 Trailmap of the Miter Basin, zoomed in. 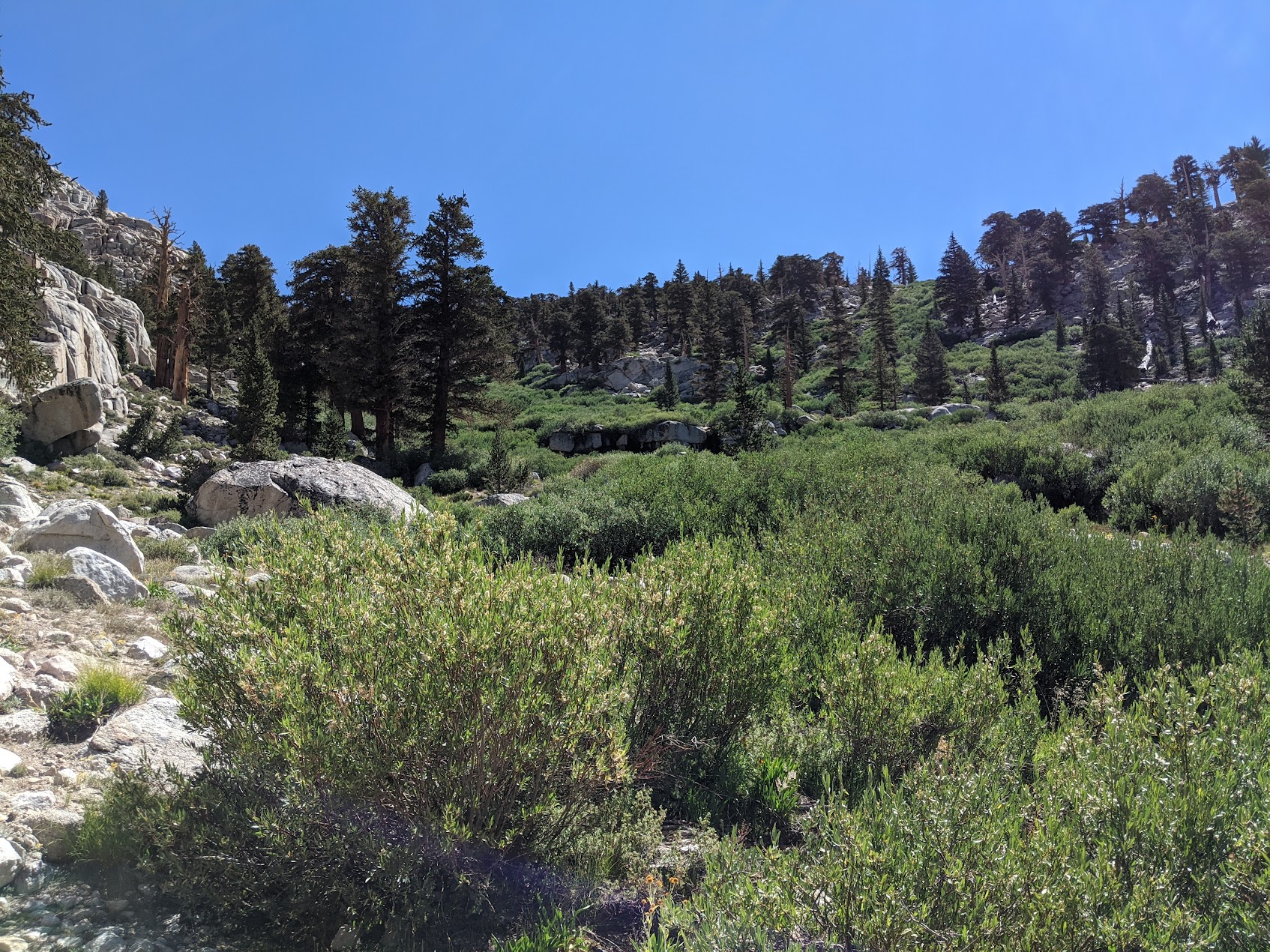 Pick a route. Any route. It don't matter. They're all bad.

Hey, the map said there was a trail. At least the view was nice. 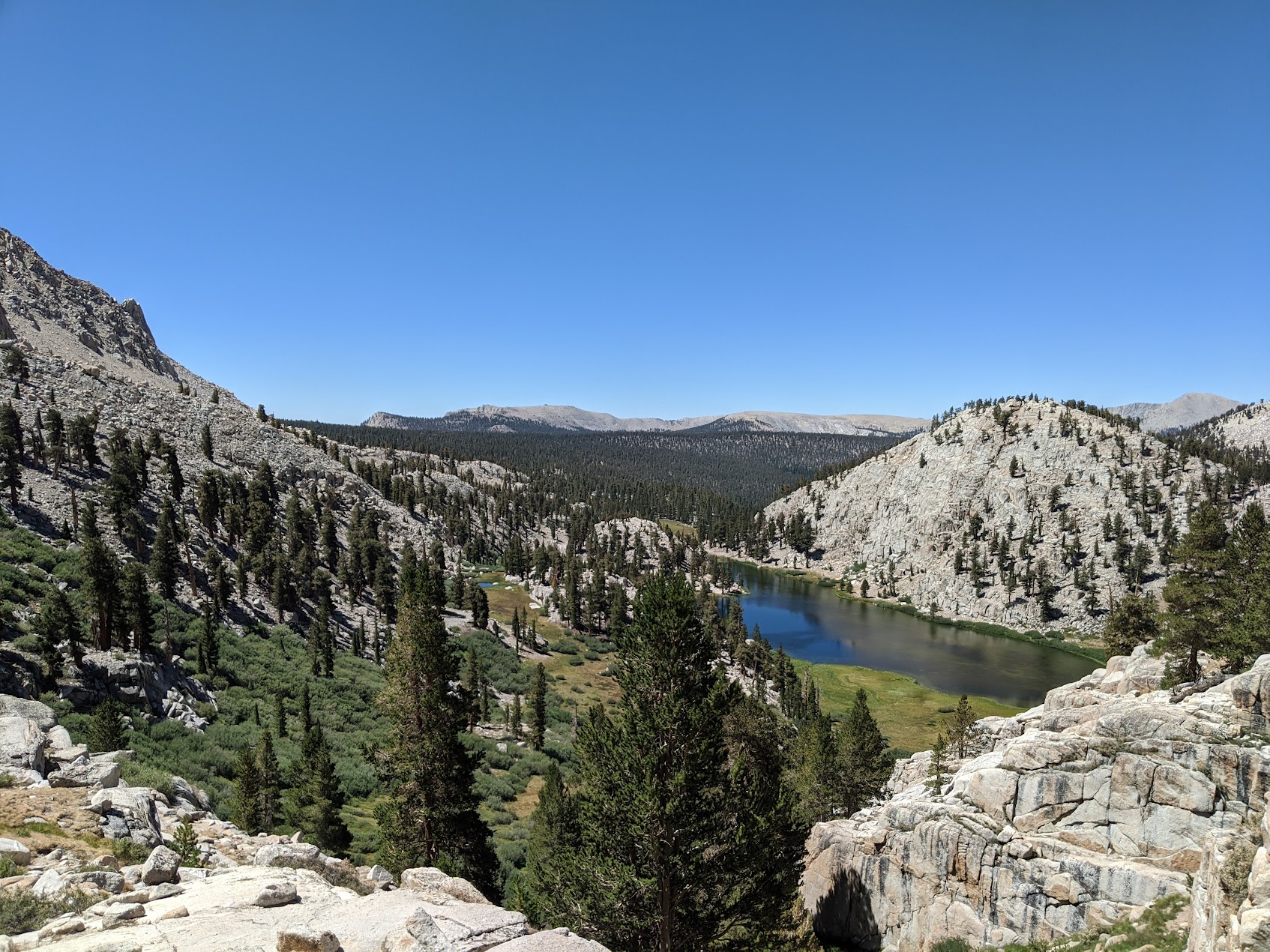 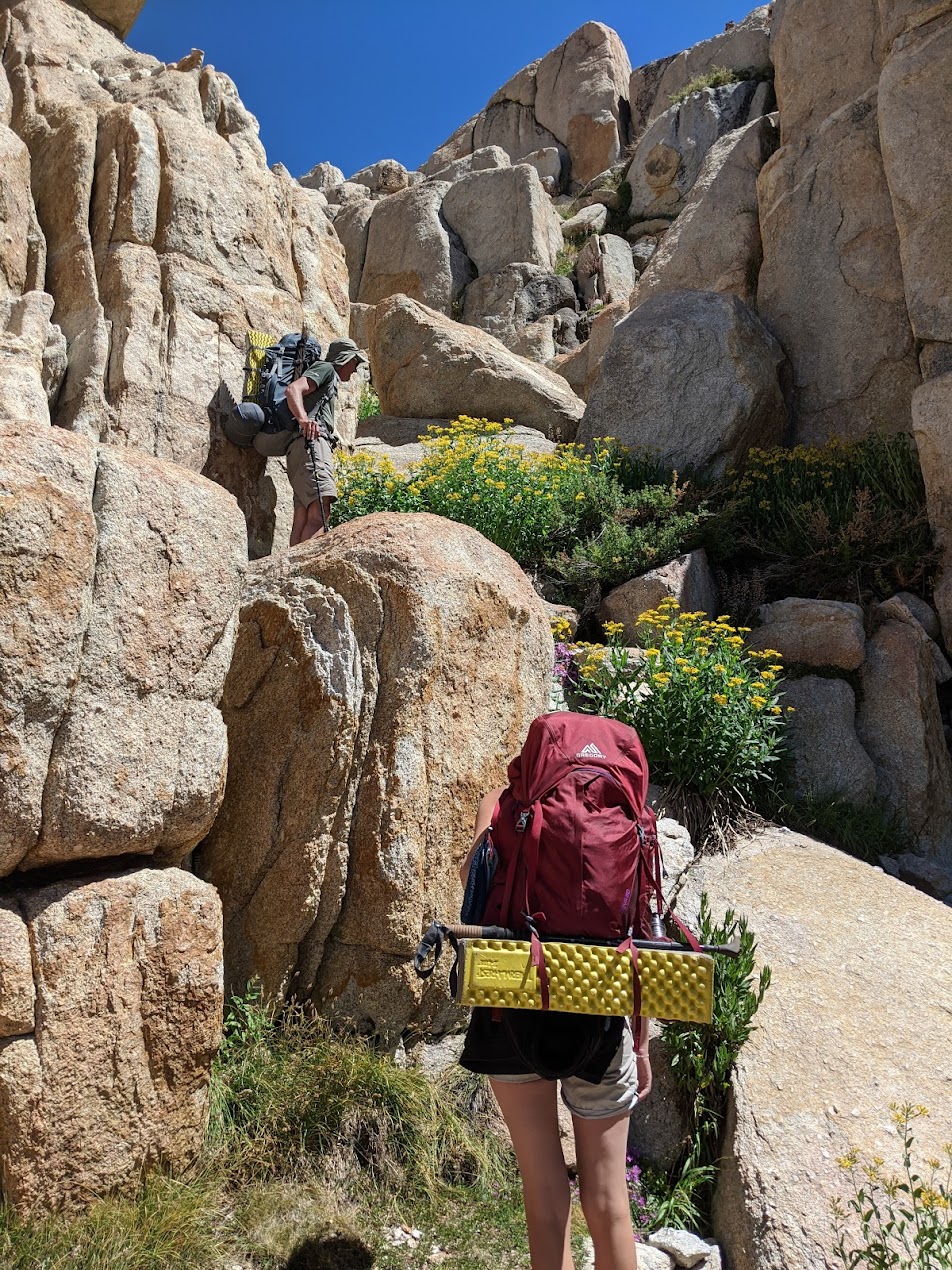 Okay, it wasn't as bad as I'm making it out to be. Had some fun scrambling up these rocks.

Break time at the top. 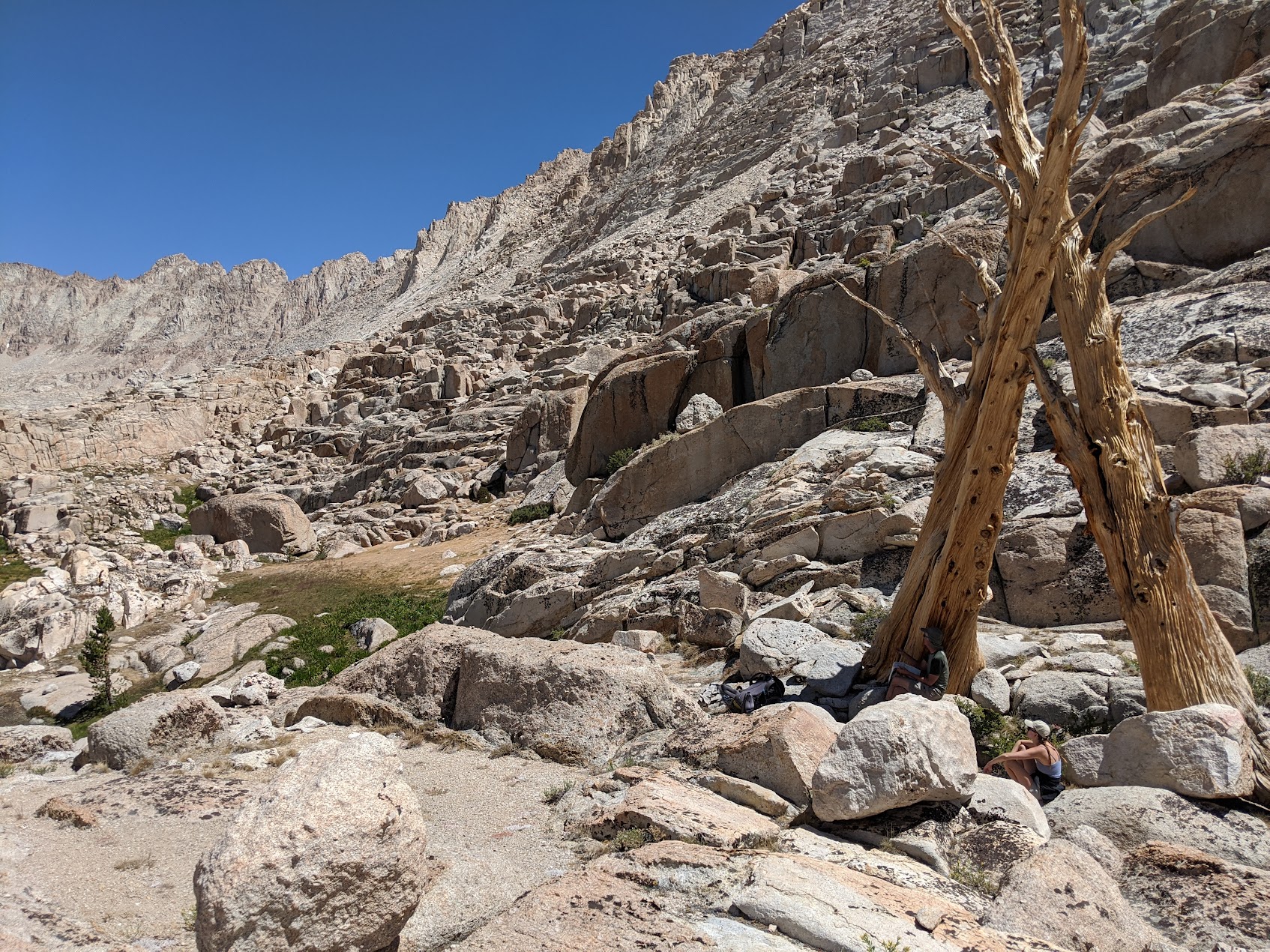 Climbing up that drainage was tricky and slow going, but it did probably save time. As we'd learn in two days, the other trail into the Miter Basin isn't exactly a cake walk either. This day was only a few miles, but the cross-country made it slow. 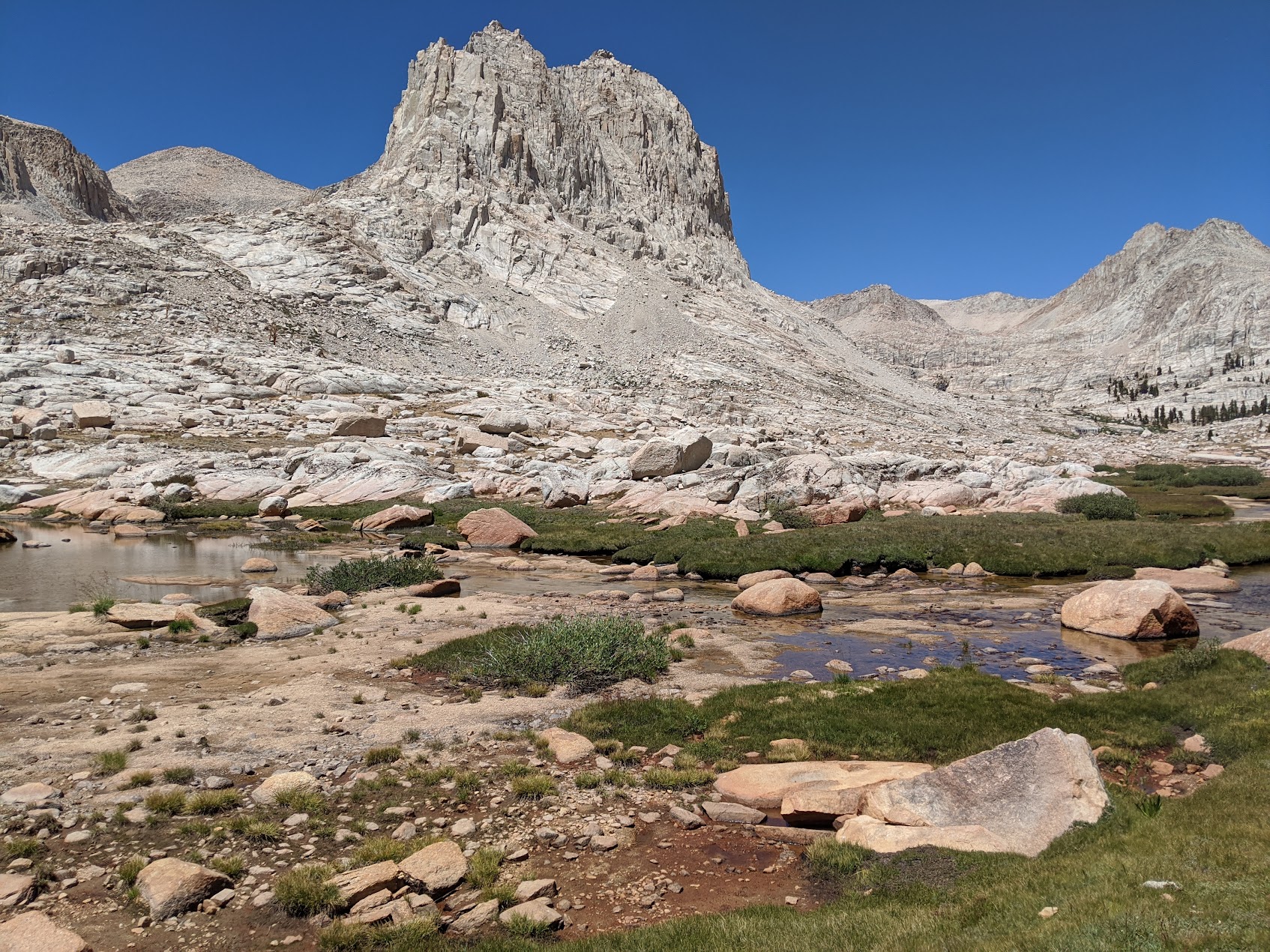 But once you're up here... it's beautiful. And finally, gone were the crowds. 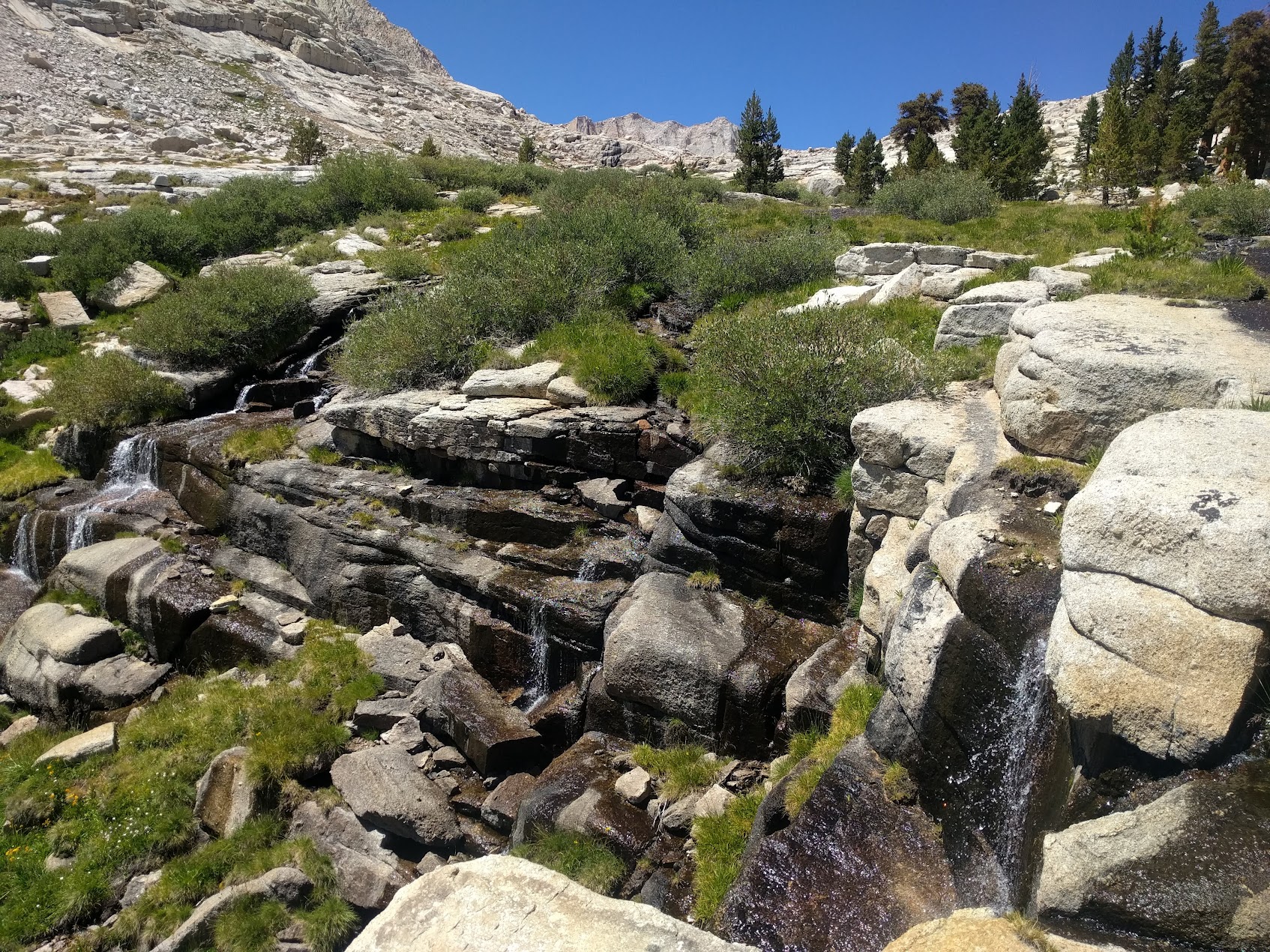 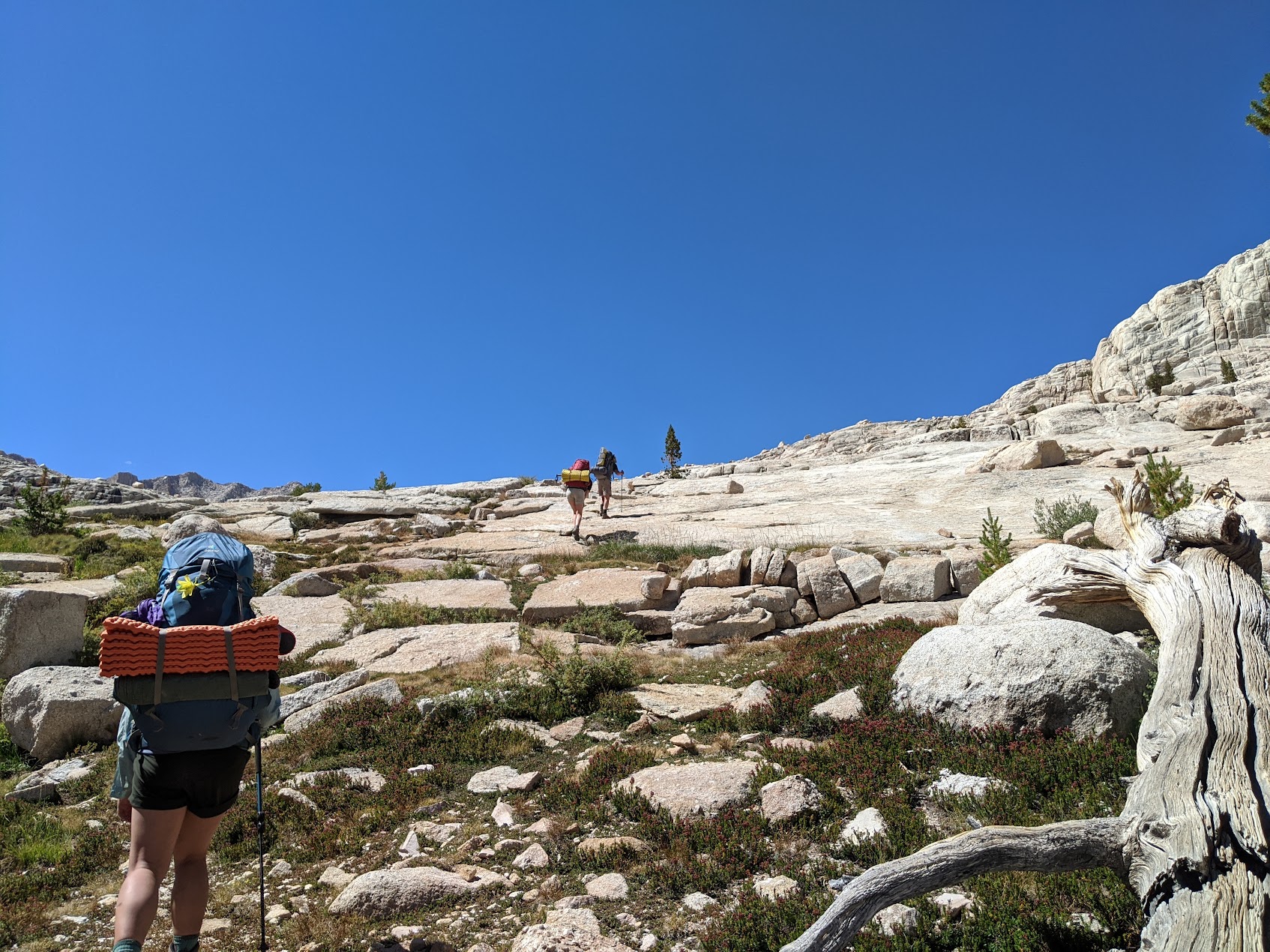 Sky Blue Lake. Lots of great camping on the South West side. 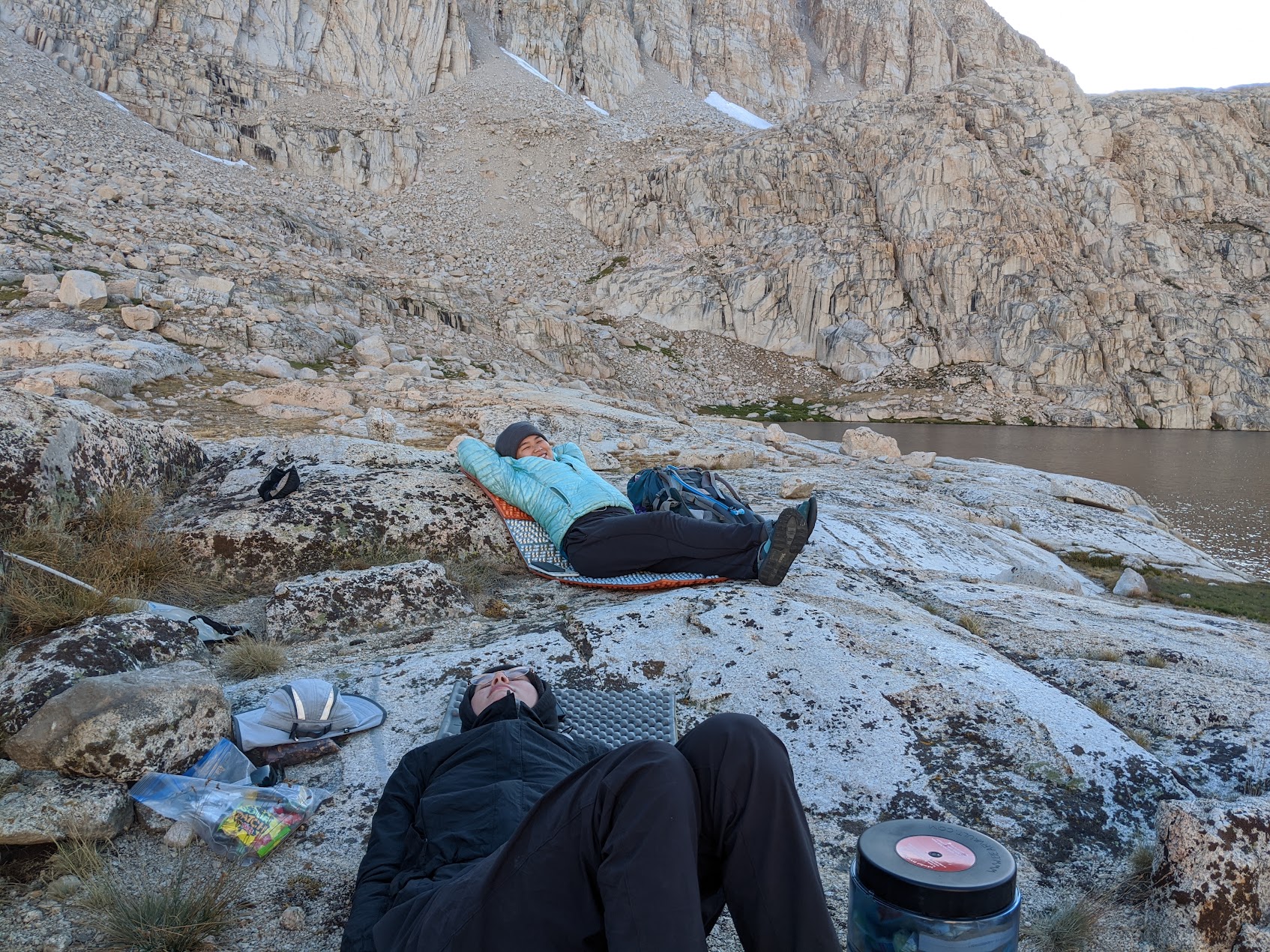 Took a layover day with ambitions of day hikes that turned into a lazy beach episode. 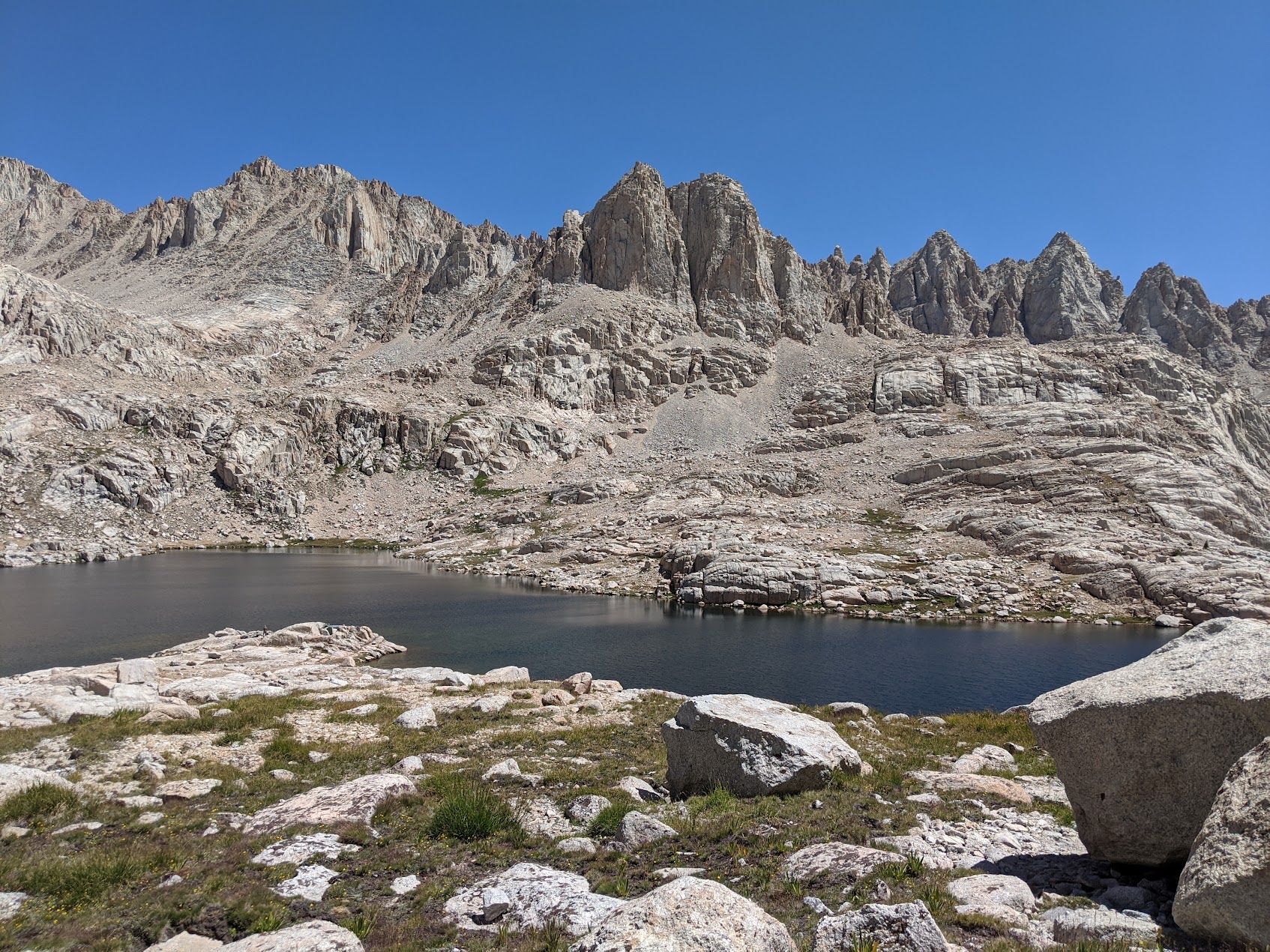 We hiked out of the Miter Basin back to Solider Lake, this time taking the "real" trail down. Of couse, the Miter Basin doesn't have much in the way of trails so we had to find it once we got low enough. 5 miles. 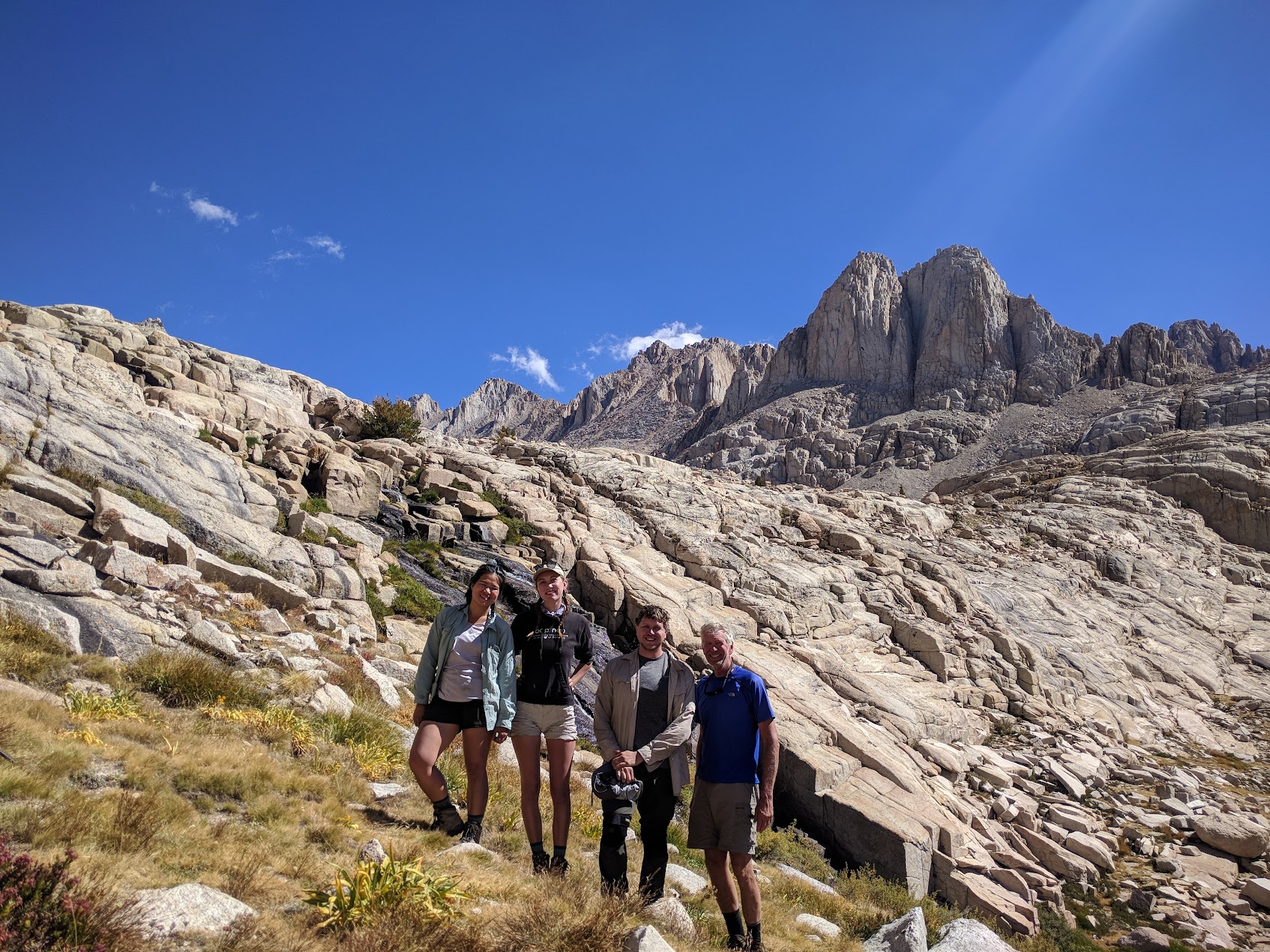 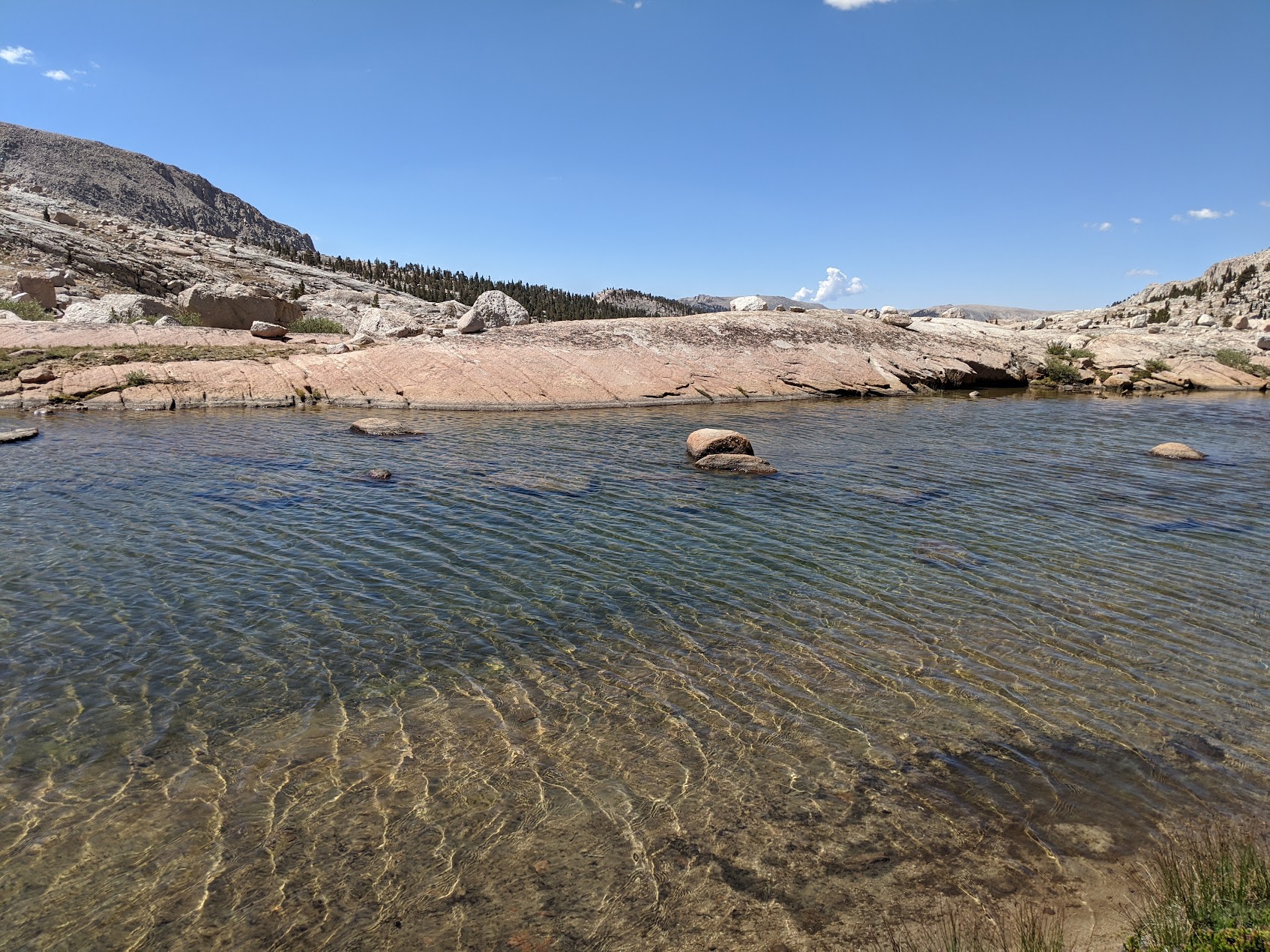 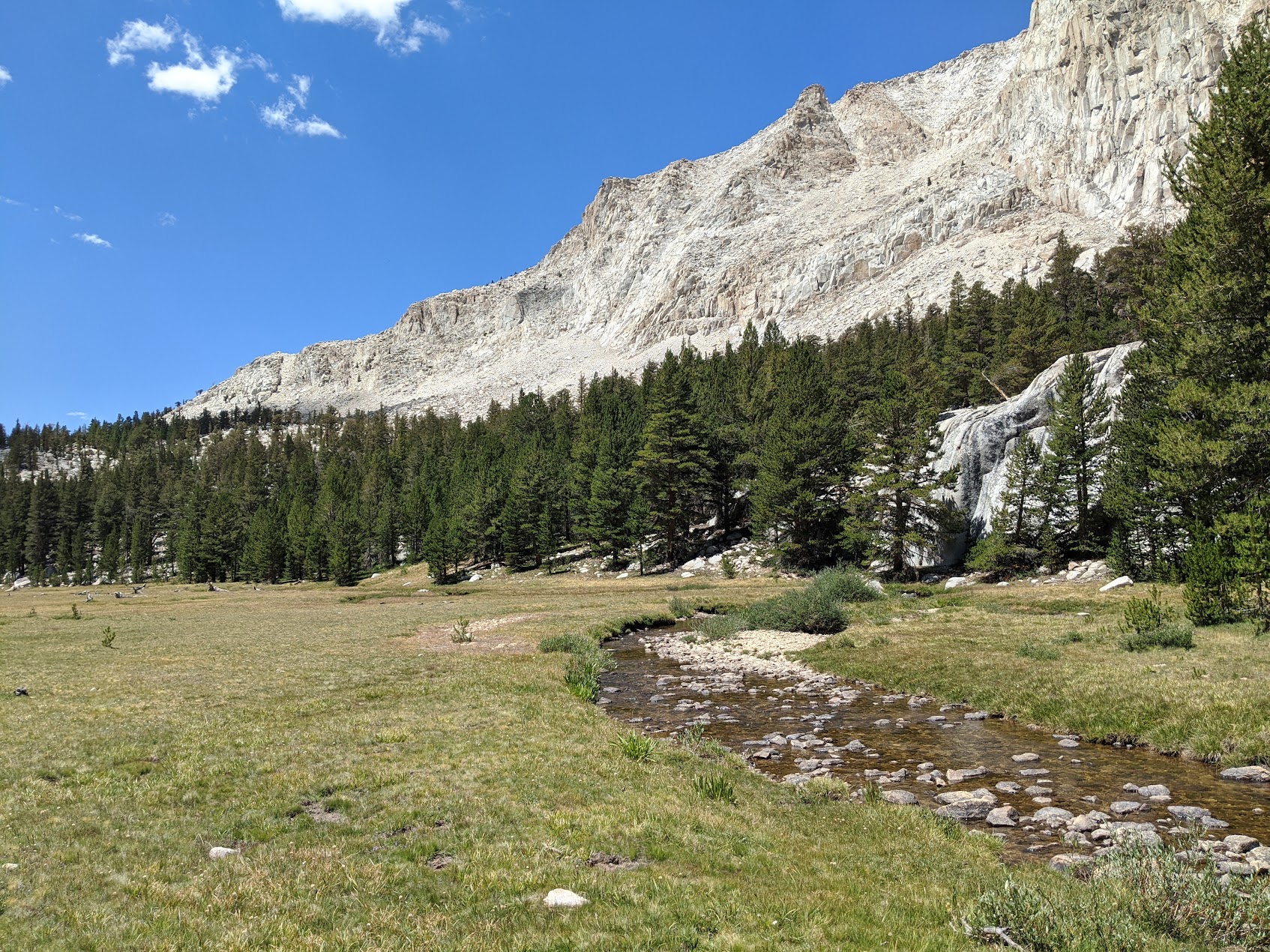 This was another long day, all the way back to the trailhead. Total distance: 11 miles, gaining a couple thousand feet and then losing a few thousand. We went over Army Pass (or Old Army) because we'd, on a previous trip, taken New Army Pass and remembered it was higher and pretty hard. This certainly was a choice that we made. See, they call the other one New Army Pass because it's the new one. In other words, it's the maintained one. 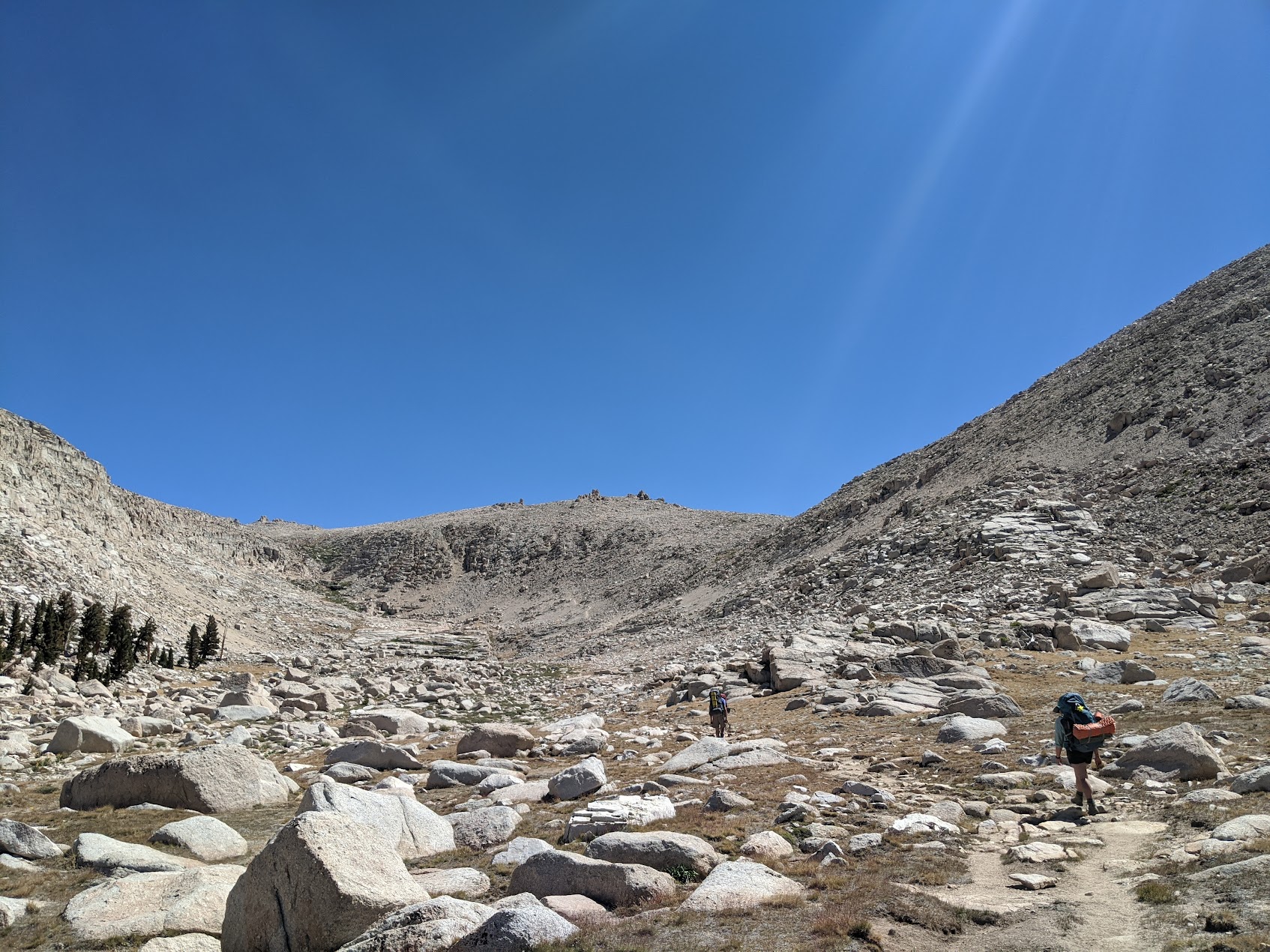 This trail isn't that steep, but it goes up for a long time.

Don't mind me, just hiking on the surface of the moon. 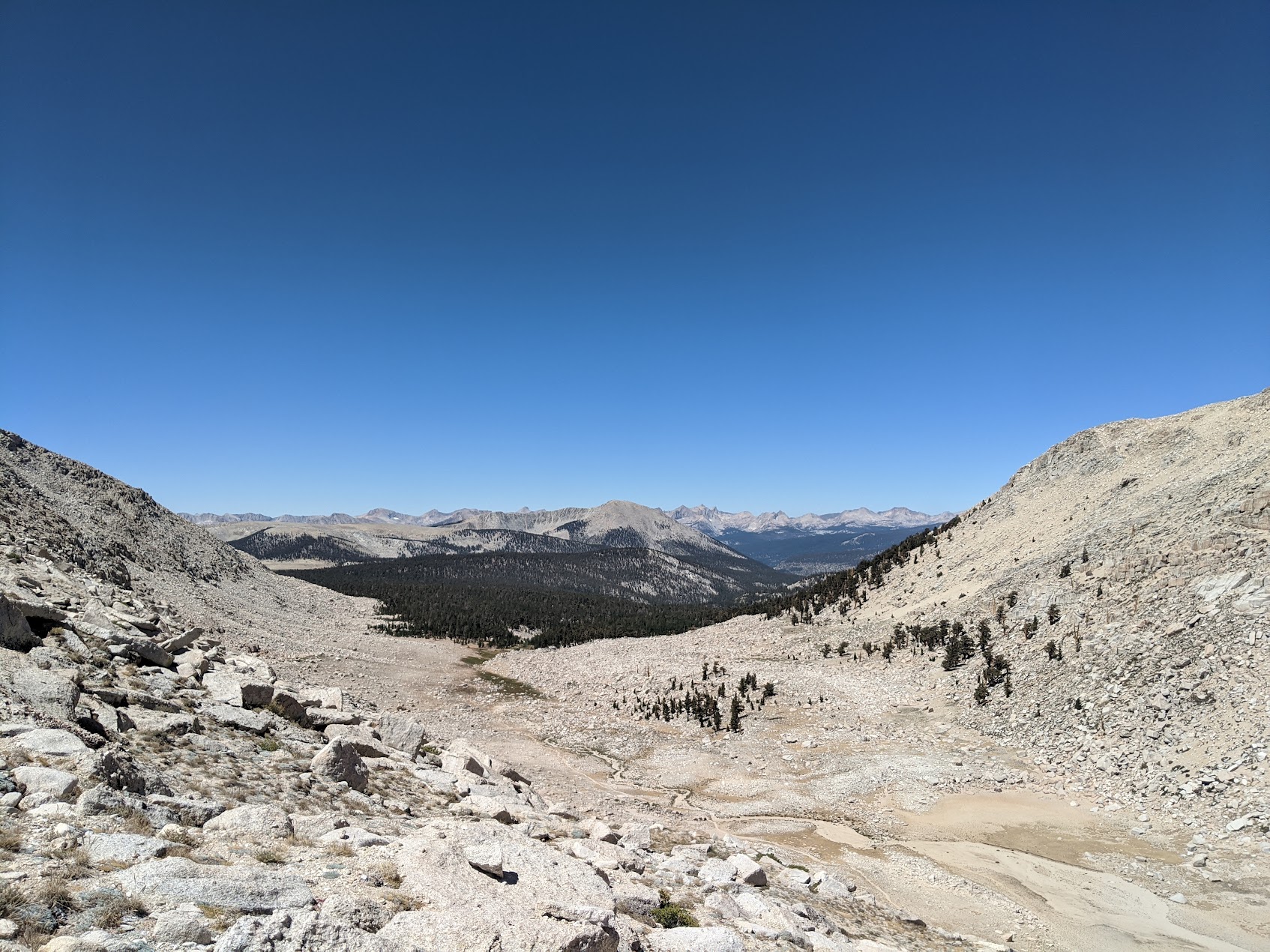 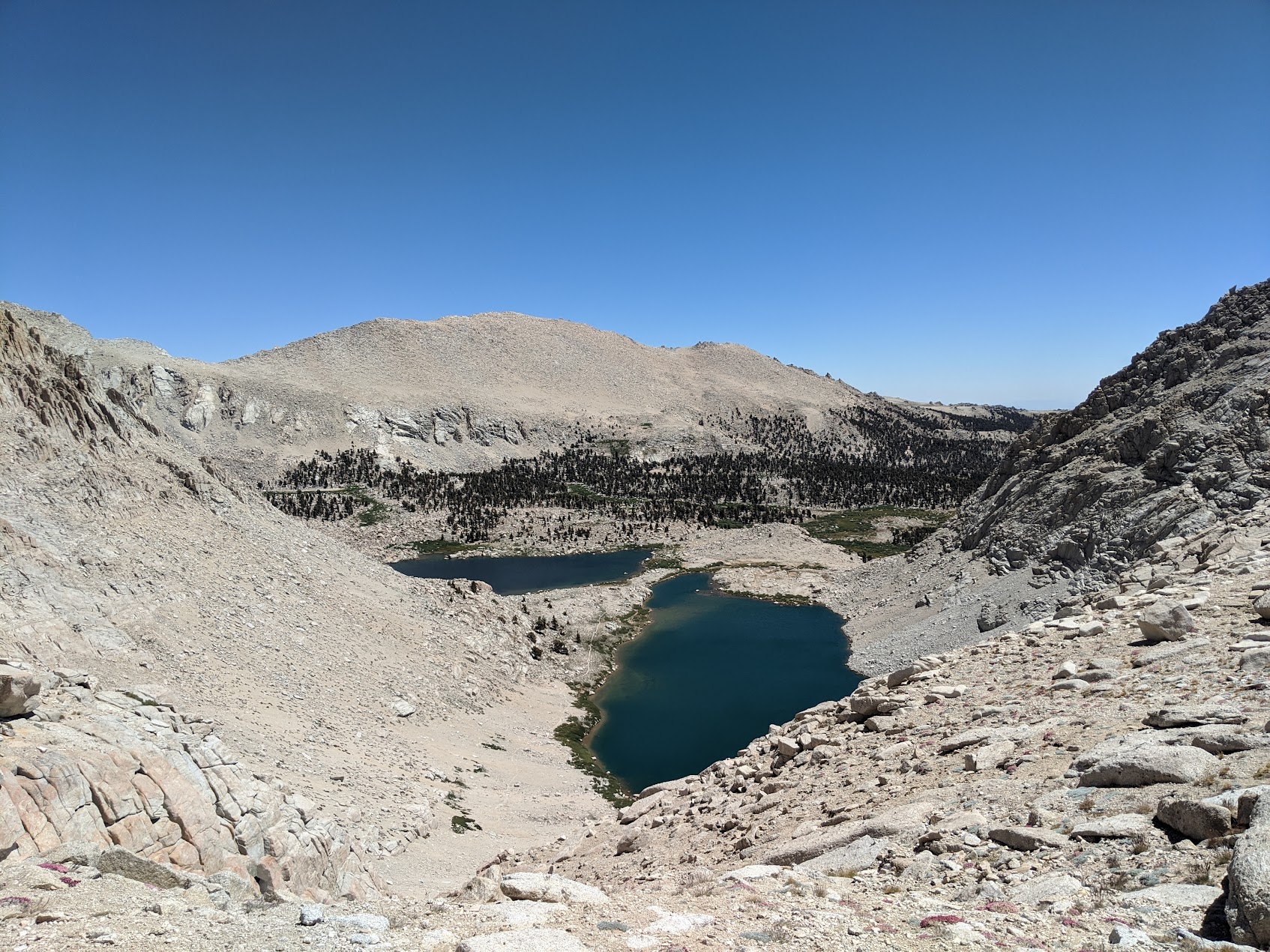 Top of Army Pass. If you look over the edge, you will think to yourself "how in the world are we going to go down this?"

The trail down is not good. Lots of slides, lots of scrambling. It really isn't safe, I'd recommend this only if you're quite sure on your feet. New Army Pass is a much easier hike.

Believe it or not, that trail actually finds a route through the madness. 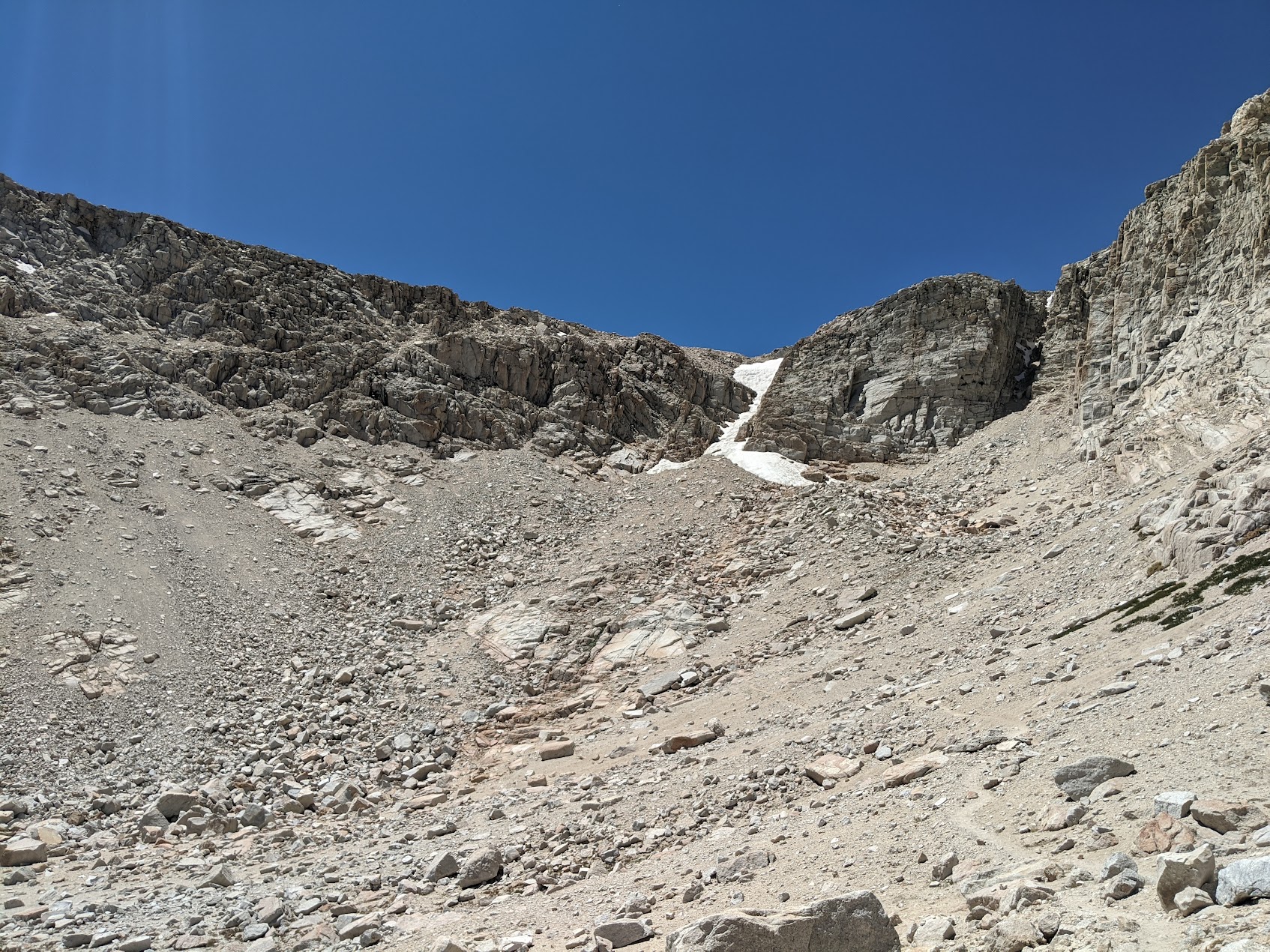 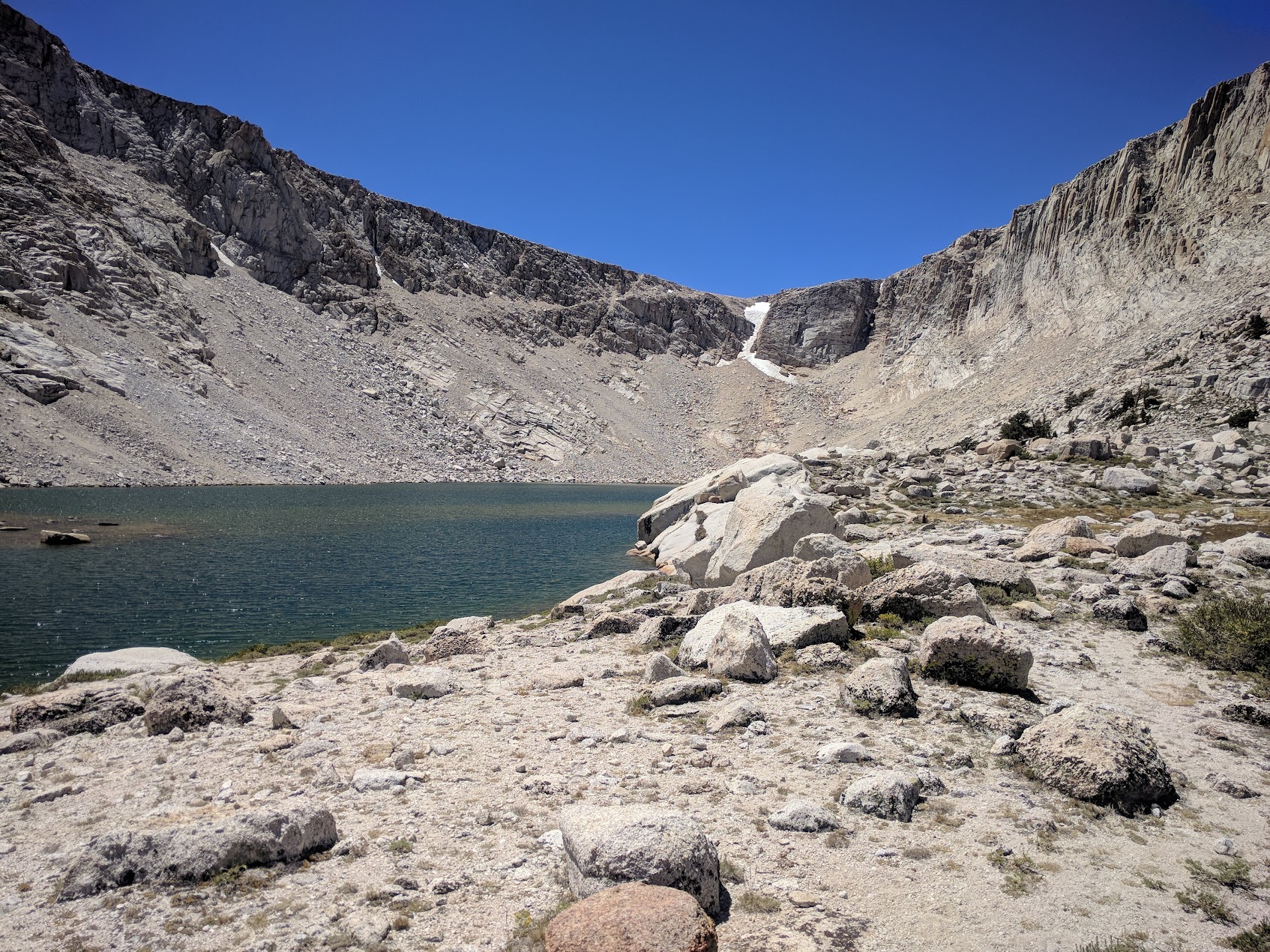 Lunch break as we looked back at where we'd climbed down. This picture doesn't convey how precarious parts of that trail are, and that's saying something.

The rest of the day was a long, but easy, walk back to the car. 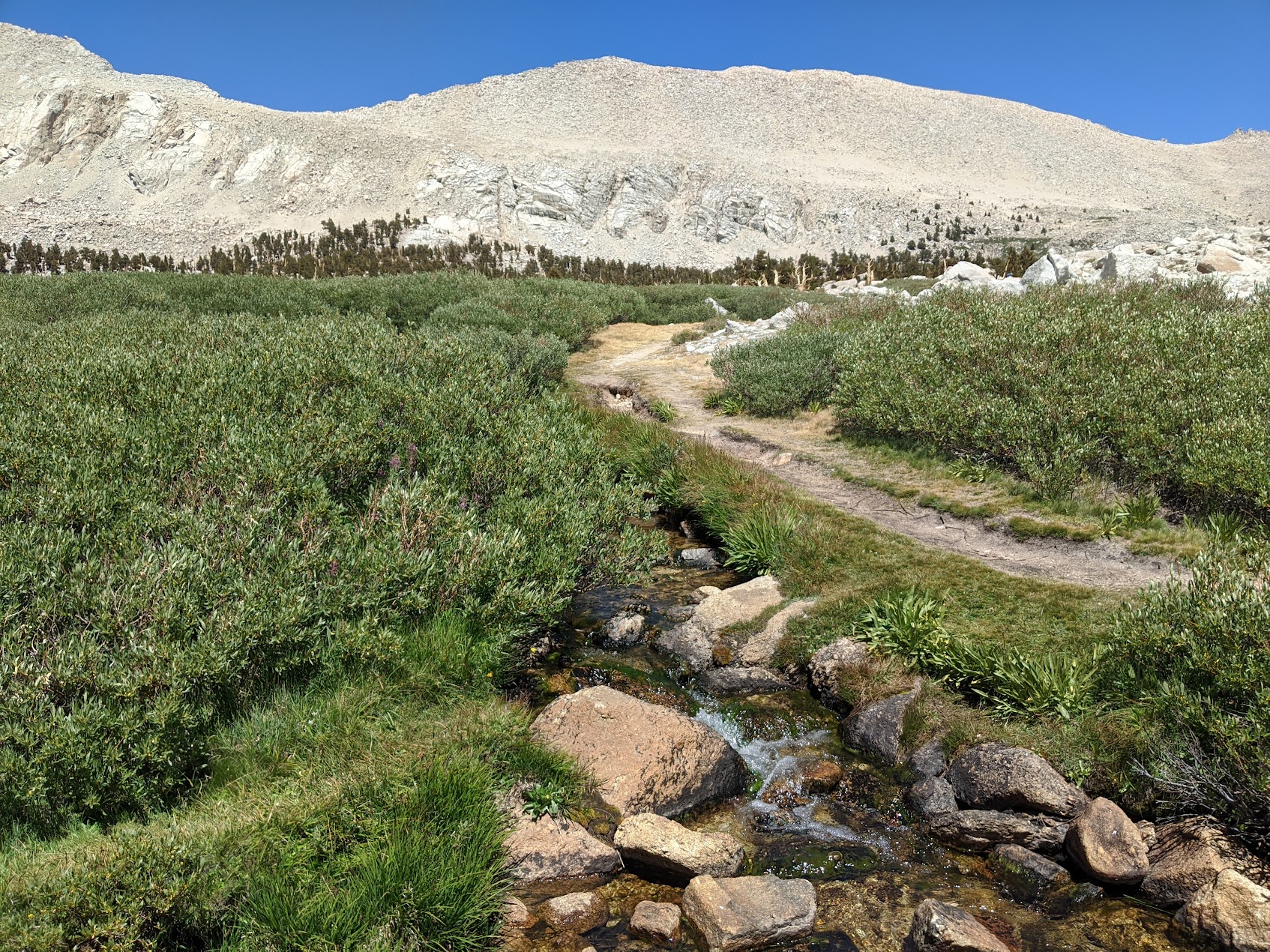 It was too late to drive all the way home so we camped the night in the Owens River Valley. 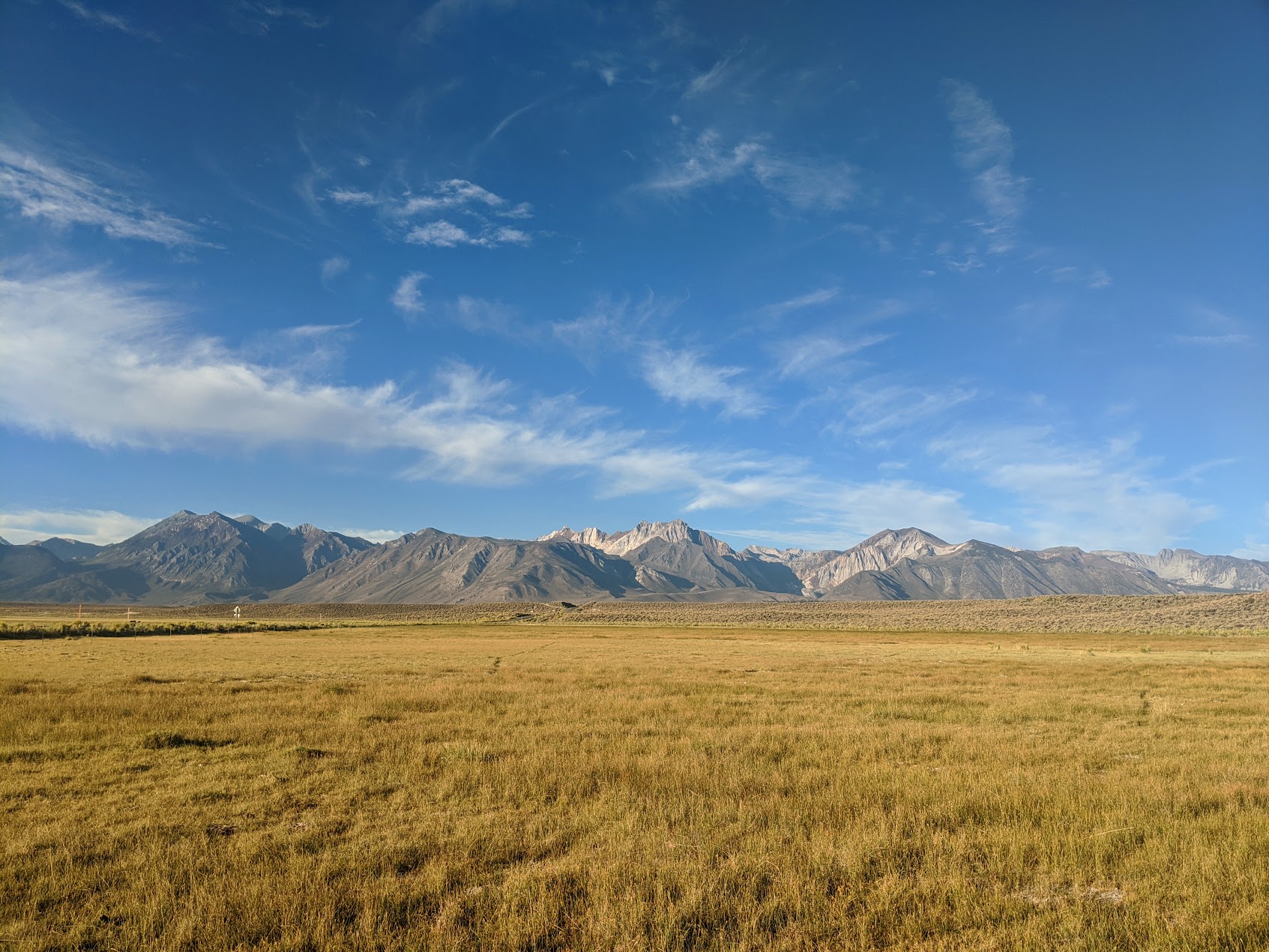 This is a great trip. The Miter Basin is beautiful and not as commonly explored as a lot of the nearby areas. If you're looking to try Mt. Whitney, this is a good way to stage that. You can go around and approach from the West. You can actually continue through the Miter Basin over a pass and skip a long section of trail (maybe I'll post that trip in the future).